"To prove this, let facts be submitted to a candid world..." 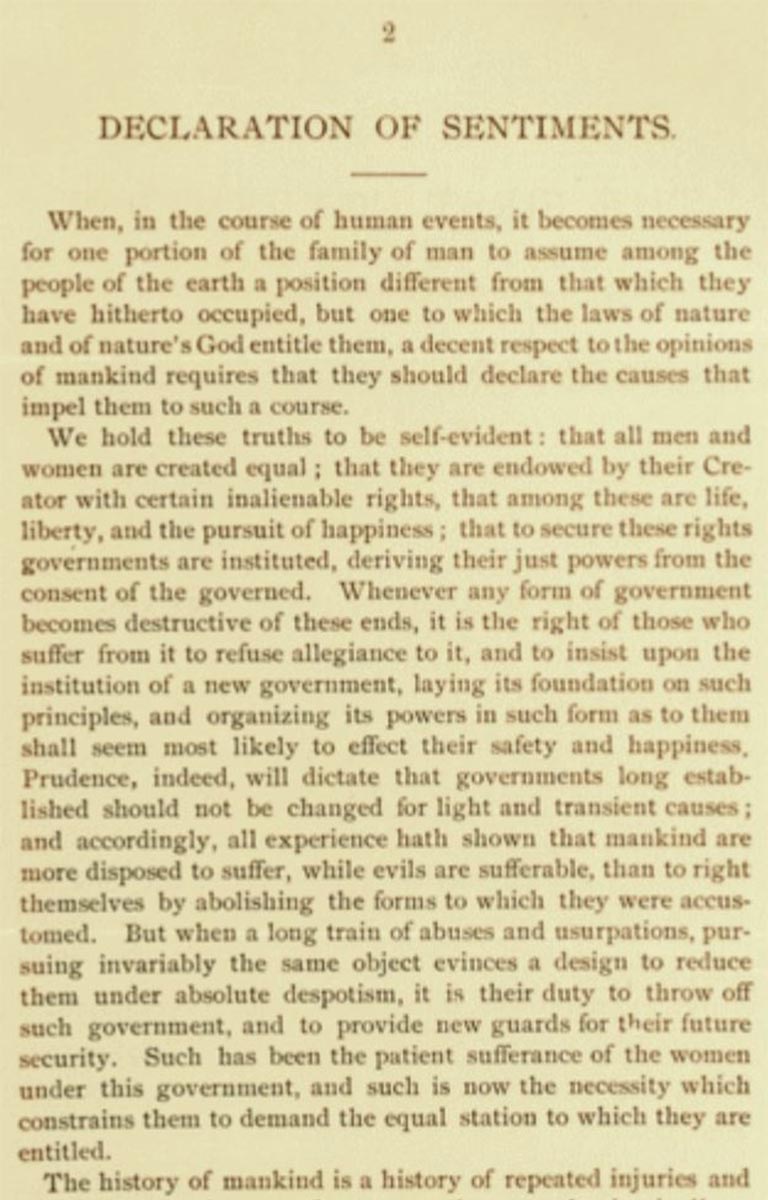 THE SENECA FALLS DECLARATION OF SENTIMENTS

Elizabeth Cady Stanton presented to the world’s first conference for women’s suffrage held in Seneca Falls New York, a Declaration of Sentiments and Resolutions, which was adopted by the conference on July 20, 1848.  Paralleling the Declaration of Independence, the power of the statement is understood best by simply reading it:

When, in the course of human events, it becomes necessary for one portion of the family of man to assume among the people of the earth a position different from that which they have hitherto occupied, but one to which the laws of nature and of nature’s God entitle them, a decent respect to the opinions of mankind requires that they should declare the causes that impel them to such a course.

“We hold these truths to be self-evident: that all men and women are created equal; that they are endowed by their Creator with certain inalienable rights; that among these are life, liberty, and the pursuit of happiness; that to secure these rights governments are instituted, deriving their just powers from the consent of the governed. Whenever any form of government becomes destructive of these ends, it is the right of those who suffer from it to refuse allegiance to it, and to insist upon the institution of a new government, laying its foundation on such principles, and organizing its powers in such form, as to them shall seem most likely to effect their safety and happiness. Prudence, indeed, will dictate that governments long established should not be changed for light and transient causes; and accordingly all experience hath shown that mankind are more disposed to suffer. while evils are sufferable, than to right themselves by abolishing the forms to which they are accustomed. But when a long train of abuses and usurpations, pursuing invariably the same object, evinces a design to reduce them under absolute despotism, it is their duty to throw off such government, and to provide new guards for their future security. Such has been the patient sufferance of the women under this government, and such is now the necessity which constrains them to demand the equal station to which they are entitled. The history of mankind is a history of repeated injuries and usurpations on the part of man toward woman, having in direct object the establishment of an absolute tyranny over her. To prove this, let facts be submitted to a candid world. “

The history of mankind is a history of repeated injuries and usurpations on the part of man toward woman, having in direct object the establishment of an absolute tyranny over her. To prove this, let facts be submitted to a candid world…

“Now, in view of this entire disfranchisement of one-half the people of this country, their social and religious degradation–in view of the unjust laws above mentioned, and because women do feel themselves aggrieved, oppressed, and fraudulently deprived of their most sacred rights, we insist that they have immediate admission to all the rights and privileges which belong to them as citizens of the United States.”

The Seneca Falls declaration was just the beginning.  It took several generations of determined suffragists to enact constitutional change with the adoption of the 19th Amendment, which was passed by Congress June 4, 1919, ratified by the States on August 18, 1920, and effective on August 26, 1920..  It simply provides:

“The right of citizens of the United States to vote shall not be denied or abridged by the United States or by any State on account of sex. Congress shall have power to enforce this article by appropriate legislation.”